Whether you’re new to the world of Dungeons & Dragons or you’re still skeptically observing the mysterious species that is the RPG player from afar and wondering what it is they’re up to over there, one of the first things you’ll need to figure out is how the dice work.

The dice used to come in a range of sizes from four-sided (D4) to twenty-sided (D20) and a set will typically include at least seven: one of each, plus an extra ten-sided die (D10). It is this set of dice that determines the fate of everything from whether a kingdom will be saved to whether or not you can successfully seduce that orc whose neckless of human ears caught your eye at the local tavern.

Here’s a quick guide to which dice D&D players use and when:

This pyramid-shaped four-sided die is not often used but it’s still important to have. It’s mostly just for calculating the damage done by smaller weapons like daggers or low-level spells. When you roll it, the number at the top point, facing upright, is the number you rolled.

The six-sided die is the most recognizable one and is used in tons of other games. In D&D, its main purpose is to calculate damage from weapons and spells. You’ll also roll it to calculate hit point recovery during rests.

Also, at the very beginning, when you’re creating your character, you’ll need to roll to determine your starting stats. Most likely, you’ll be rolling D6 to do that.

The eight-sided die, like the previous two, is most often used for calculating damage. This might seem confusing but it’s not. The books tell you which die to roll for which weapon.

For example, a dagger deals 1d4 piercing damage while a greatsword deals 2d6 slashing damage. This simply means you’ll roll a single D4 if you’re stabbing someone with a dagger and two D6 if you’re swinging at them with a greatsword.

The ten-sided die is the one you’ll use to calculate damage for heavier weapons and spells.  Most sets include two D10s because you’ll likely also use them to roll D100. D100 dice exist but, as you can probably imagine, 100-sided dice are a little unwieldy so the 2d10 solution is more popular.

D100 rolls are used to determine the percentage chance of something happening. If you’re in a mad scientist’s lab sipping all their bottles of strange glowing potions because you skipped basic lab safety day in school, there might be a, say, 68% chance that the combination of some of those potions will make you incredibly ill and possibly dead. You would need to roll above 68% to not get sick. You would also probably need to stop drinking unidentified potions in labs—but one step at a time.

As you might guess at this point, the 12-sided die is used for—that’s right! Calculating damage. Only a few of the bigger weapons and spells deal D12 damage. So, it’s not one you’ll roll often.

This iconic 20-sided die is the one most commonly associated with Dungeons and Dragons. That’s partly because it happens to be the one you most often use while playing. The D20 determines your fate.

If you want to do just about anything, you’ll need to roll a D20 to find out if you pulled it off. You roll it for attacks, skill checks, and saving throws (a roll you make after you are attacked in an effort to minimize the damage by, hopefully, reacting quickly or dodging).

Say you’re trying to throw a dagger into a dragon’s eye and, based on your character’s previous training and experience with throwing daggers into eyes, you need at least a 14 to succeed—but you roll a 19. You overachiever, you.

Many DMs will translate this much-higher-than-necessary roll as meaning the throw was particularly good and more damaging than a run-of-the-mill 14 dagger throw. Likewise, if you roll below a 14, you fail. And the further below 14 you roll, the more spectacularly you fail.

Is 2d10 the Same as 1d20? A Treatise on Manipulating the Odds

The D20 gets a lot of flack for its size. Without digging too deep into the math, the twenty sides on a D20 make the probability of getting any one of those numbers equal. That means you’re just as likely to crit fail (roll a 1) as you are to crit succeed (roll a 20)—regardless of how much experience or talent your character has for the task in question.

This chaotic unpredictability of the D20 is known as “the swing” and it has been responsible for some thoroughly absurd outcomes on tabletops across the globe.

For some DMs, this chaos ends up being annoying. Performing what should be basic skill checks becomes wildly unpredictable. Can the walking bicep that is your dwarf barbarian break down a simple wooden door? With a D20, there is a distinct possibility they might fail even if it feels like they really, really shouldn’t.

To get around this, some DMs choose to substitute the D20 with two D10s. The logic here is that with two D10s, it’s impossible to crit fail. You can’t roll a one if you have two dice. And, for math reasons that you can dig into here, rolling two D10s is more likely to give you results near the middle of the distribution than the outliers. Because of this, skill checks and other rolls become a little more predictable and controllable.

However, when crit fails and crit successes are less likely, you do lose a little bit of that thrill of the gamble. You’re also decreasing the overall odds of failure so you’re making the game easier. That’s not inherently a bad thing.

Some styles of gameplay are still fun when they’re easy, especially roleplay-heavy ones where it’s more about getting into character and exploring a mutually-constructed imaginary world than killing baddies. However, for a more tactical, battle-heavy campaign where the thrill comes from the challenge, the loss of crit fails can make it feel like there’s not enough risk, not enough at stake.

A middle road is possible where DMs opt for 2d10s for more routine or trivial checks and 1d20 when it’s time to let the fates decide. As with most aspects of the game, it’s your call.

…Or Skip All That and Just Use an App

While our poor ancestors had no alternative but to carry around large sacks of dice and get into arguments while decoding the success or failure that the dice foretold, we don’t have to struggle. With sites like Wizards or Roll the Dice and apps like CritDice or Roll20, you’ll never have to lift a handful of dice again. They also tally up the totals for you and sometimes offer other helpful perks that we don’t have time to get into right now.

In terms of gameplay, there is likely no meaningful difference between using real dice and using an app. The law of random chance still applies whether you go high tech or low tech. And for bigger battles with tons of NPCs, it’s often more practical to just use an app. Typing “12d6” into your phone is easier than physically rolling 12 six-sided dice.

However, some players have a nostalgic affinity for dice and claim that a physical set of dice adds to the game—in the same way that music “just sounds better” on vinyl. To their credit, dice do look cool. And you can find endless varieties of colors, designs, and materials that make it tempting to amass a giant collection of pretty, pretty dice.

Plus, as a DM, you can have a special set of dice reserved for the biggest bad of the game and then delight in watching the players quake in their boots every time you pull out the infamous set. So, there are arguments to be made for keeping it old school, but it’s all a matter of personal preference. 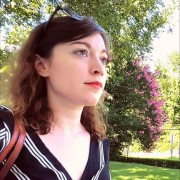